The Akita Inu, the pride of Japan, is actually the biggest of all six native Japanese dog breeds – others being the Shiba Inu, Kai Ken, Shikoku, Hokkaido, and the Kishu. This is an incredibly beautiful Spitz-type dog that is best known after its great strength, amazing loyalty and dominant attitude. Indeed, the Akitas are above anything else very tough, powerful, brave, determined, athletic, agile, and hardy, but also very intelligent, docile, resourceful and independent. They make wonderful family dogs, but are also known as superb guard dogs and watchdogs. Yep, the Japanese Akita is very territorial, very protective, and ready to give its life in defense of its family. Considering how large, strong and heavy these dogs actually are (males up to 26 inches (66 cm) height and 122 pounds (55 kg) weight), it’s not hard to guess that strangers can be in serious trouble if enter the owner’s property unannounced. So, if you own this dog you should definitely put a proper ‘beware of dog’ warning on your front gate! Apart from that, this dog is usually not willing to share its space with too many other animals. That’s why it is of great importance that you socialize and train your dog in obedience as soon as possible. Of course, it will take you some time to have your Akita well-mannered and well-behaved, but once you get the job done, it will be a pure joy to share your living space with this wonderful and authentic dog. And now let’s take a look at our list of ten most interesting Akita Inu facts.

1.) The Akita Inu originates from the mountainous regions in the northmost parts of the island of Honshū in the Akita prefecture (thus the breed’s name), Japan. It is still unknown when exactly the Akita was domesticated, but experts believe that the breed was developed from the Matagi Dog, considered the oldest of all Japanese native dogs. Unlike Matagi Dogs, who were primarily used for big game hunting (Asian black bear, wild boar and Sika deer), Akita Dogs, while still used for hunting, were primarily developed for dog fighting during the Tokugawa period (1603-1868). For this reason, the Akita was eventually influenced by crosses with a few other Asian and European breeds, such as Tosa Inu, Hokkaido, Great Dane, English Mastiff, and St. Bernard.

2.) The Akita prefecture was once one of two areas (other one being Tosa) in Japan where dog fights were highly popular. In the beginning the Akita dogs were bigger and stronger than Tosa dogs, winning the majority of the fights. That’s why the Akita was often called the ShiShi Inu back then, which means “Large Dog“. However, the situation gradually changed as the years passed, when the Tosa Inu breed was developed as a product of crossbreeding between Tosa dogs and some larger European breeds. Later on, the Akita and Tosa Inus were also crossbred. These newly developed dogs were labeled as the Shin Akita (New Akita).

3.) During the WWII, the breed was at the brink of extinction. One of the main causes was starvation and the shortage of nutritious food. Apart from that, many Akitas were killed and eaten by the starving populace, but also by the government to prevent the spread of diseases. Their pelts were used in making coats for Japanese soldiers during the war. Like that wasn’t enough, the wartime authorities issued an order that all other dogs except German Shepherds (used as guard and military dogs) be captured and confiscated. Afraid for the fate of their dogs, many owners tried to save them by turning them loose in the remote mountain areas (where they continued interbreeding with Matagi dogs) as well as by crossbreeding them with German Shepherds. Those were indeed dire times for Japanese Akitas. However, thanks to the post-war efforts of Morie Sawataishi and other compatriots, who collected dogs from remote areas and started new litters, the breed was finally saved and renewed.

4.) Almost all Japanese Akitas in existence today are descendants of the Ichinoseki line (known as the “Mastiff” type in Japan), which is one of two major bloodlines – the other one being the Dewa line (known as the “German Shepherd” type), which is now almost extinct. These two lines were developed in the breed reconstruction period after the WWII. The Ichinoseki line, which was developed from a dog named Ichinosekitora-go that was owned by Mr. Kuniro Ichinoseki, can be traced back to the fighting dog called Gamata. According to Mutsuo Okada, a former vice chairman of the Akitainu Kyokai (Akikyo), this was a type of Shin (New) Akita, which was developed, as previously stated, by crossbreeding of the Akita and Tosa fighting dogs. The Dewa line, which was developed from a dog named Dewa-go from the Kennel of Yozaburo Ito, can be traced back to the famous Akita called Kongo-go. Unfortunately, it went into a decline when it was realized that the newborn dogs do not properly resemble the Akita dogs of the Kongo line. This is the reason they are slowly replaced by the dogs of the Goromaru line (Ichinoseki type). Today, only the Kumomaru-go and Tetsuyuki-go lines are considered descendants of the Dewa type dogs. 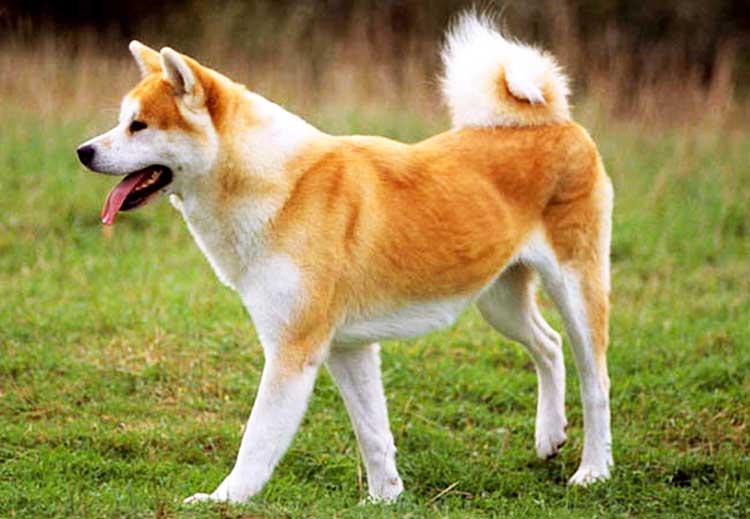 5.) In 1927, the Akita Inu Hozonkai society was established by Mr. Shingeie Izumi in order to preserve the breed. In 1931, the Akita Inu was officially designated as a Japanese Natural Monument. Since then, the breed has been protected by law and dog fights have been forbidden in Japan. The image of this dog can be found on various Japanese postage stamps. There is also an Akita monument in the city of Tokyo. Also, the Akita Inu represents a symbol of health and wellbeing in Japan. For this reason, Akita statues are often gifted to sick people and pregnant women instead of flowers and similar other things. All of this just proves how much respect Japanese have for this magnificent dog.

6.) Back in history, only the ruling class – aristocracy or wealthy people were allowed to own these dogs in Japan. At that time, the Akitas were usually kept as guardians and companions, but were also quite often used as hunting dogs. Today, they are mostly used as companions. However, many Akitas proved to be incredibly versatile working and sporting dogs. Many of Akitas are now used as therapy dogs, guardians and watchdogs. Well-trained Akitas are as well outstanding competitors in various dog sports, such as obedience and agility trials, weight pulling, tracking, conformation, and schutzhund.

7.) You all probably heard of a loyal dog named Hachikō, but it’s the name almost every Japanese Akita article should include. The story of this dog actually helped in establishing this breed as one of the most popular worldwide. Hachikō was a pale-yellow Akita owned by the University Professor Hidesaburō Ueno of Tokyo during the twenties. This dog accompanied his master every morning to the Shibuya train station, from which Professor would go to work. Later, at four o’clock in the afternoon, Hachikō would have always returned to the same spot to meet and greet his master back from work. Many people marvelled at their relationship and they were both well-known at the station. Unfortunately, the fate turned against them and Hidesaburō Ueno suffered a stroke while at work and later died in the hospital. He never returned to the station again. However, Hachikō, 18 months old when that happened, continued to meet the train at four o’clock in the afternoon for the next nine years – until the day he died (March 8, 1935). This now legendary Akita is considered a true symbol of loyalty, respected and praised all around the globe. This dog is also the reason many Akitas in Japan are often referred to as ikken isshu (one person dogs).

8.) The Japanese Akita is definitely not a good choice for novice owners! This dog is extremely stubborn, independent, willful, and is one of the most challenging breeds to raise and socialize. As an independent thinker with dominant attitude and strong temperament, the Akita Inu will literary push you to the limits. Not only will you have to be a true pack leader that is able to make your dog do certain things, but you’ll also have to be very consistent and imposing, always proving your higher ranking in the pack. This, of course, demands a good amount of experience in working with dogs and a lot of patience, understanding and dedication.

9.) Like I wrote in the introductory paragraph, the Akitas are unfortunately prone to extremely aggressive behavior, especially if not treated properly in the puppyhood. It can be manifested in many different ways. Many Akitas are usually very protective of their families, and will attack any stranger at sight. They can even attack a friendly person that acts abnormally or the one that keeps a prolonged eye contact. Food and toy aggression is also a common trait of these dogs since they are very possessive. This makes an Akita Inu very dangerous for children. That’s why it is important that you always keep an eye on kids while playing with this dog. Also, Akitas can be extremely aggressive towards other dogs and pets. They will chase and kill cats and other non-canine pets, including livestock. Considering their dominant attitude and strong will, it’s obvious that Akitas usually won’t tolerate dogs of the same sex, which of course means fight. Some of them might be even aggressive with dogs of the opposite sex. As you can see, these dogs are definitely not a joke! Akitas should be extensively socialized and trained in the puppyhood. However, keep in mind that no matter what, you should always supervise your Akita in the company of other unknown dogs, especially in the off-leash dog park!

10.) Although Akitas are considered healthy and hardy in general, there are a number of various genetic diseases they can suffer from. Among them are different immune-mediated endocrine diseases (Cushing’s Syndrome, Diabetes mellitus, Hypothyroidism), autoimmune diseases (Autoimmune Hemolytic Anemia, Vogt-Koyanagi-Harada syndrome, Pemphigus Foliaceus) and non immune specific conditions (Progressive Retinal Atrophy, Glaucoma, Hip dysplasia, Elbow dysplasia), but also some specific conditions for this breed (Pseudohyperkalemia and immune sensitivity to insecticides, anesthetics, tranquilizers, and vaccines). That’s why it is of great importance that you buy the Akita puppy from a well-known and reputable breeder.

There you have it – our list of ten most interesting Akita Inu facts. I hope you will have fun reading it, and what’s even better, that you’ll learn some interesting things which will help you to properly understand this primitive dog breed.

One thought on “Ten Most Interesting Akita Inu Facts”

The Siberian Husky is a Spitz type Arctic dog originating from, as its name suggests, Siberia. This is one of...