Hello good people! I am a proud owner of a wonderful female Siberian Husky called Leah. We’ve been through a lot, ups and downs, goods and bads. It was, and still is, one silly and lovely journey full of nice and unforgettable moments. Well, not always nice, but yes in general! So I’ve decided to share all of my knowledge about this wonderful breed with you. Everything you’ll read here is based on my own personal experience and research. In this and following articles you’ll learn all you need to know about Siberian Husky characteristics and much more. So read, enjoy and learn – be one proud and happy Husky dog owner! My own Sibe called Leah

The Siberian Husky or Sibe is one of those primitive dogs that will charm you at first sight with his lovely eyes and elegant shape. Beautiful and wild, it is a medium-sized working dog physically very reminiscent of the grey wolf. This breed is a part of Spitz type genetic family. Main Siberian Husky characteristics are stubbornness, intelligence, strength, speed, agility, independence, resourcefulness, endurance, and amazing sense of orientation. This dog has the strong posture, erect triangular ears, the long, curved, and harry tail, wonderful eyes, which often come in many different colors, and dense double coat, which also comes in many different colors and in many motives. Its movement is light and swift with breathtaking elegance. Huskies can run fast and long. They can run across vast distances – more than 20 miles – without stopping.

People often think they are solely polar dogs accustomed to the harsh winter climates only (and indeed they are, since they can withstand temperatures below -50°C/-58°F or even -60°C/-76°F), but in reality they are equally adaptable to cold and hot extremes thanks to their unique double coat, which protects them from both elements. You’ll certainly have to take some precautions during the summer, but more on that read here. They have an excellent sense of smell! It is so sharp that they can find out how much time passed since the animal had crossed certain place, and also they can find out all they need to know about the animal they are tracking – its height, proportions, weight, etc. In simple words, they can literally create a mental image of that animal. Huskies lifespan is somewhere between 12-15 years.

All About Siberian Husky Physical Characteristics

The Husky has a strong and straight back and his loins are rounded and powerful – they are narrower than its breast and are slightly elevated. Its wedge-shaped head with a medium length snout is slightly rounded and it’s proportional to his body size. Its medium size ears are triangular, stiff and fat, rounded in fur. They’re up high on the head and are close to each other. Because of that Sibe has a great sense of hearing. It is almost impossible to catch them off guard even when they’re asleep. One of the most recognizable Siberian Husky characteristics are his eyes. They are almond shaped and slightly curved, and they can come in many colors as stated before – blue, green, brown, black, and amber. Husky can have eyes of different colors, in fact, it is quite normal. Also, it is possible that the dog has two colors in one eye! This phenomenon is often referred to as “parti eye“.

My own female Husky has one blue and one brown eye, and people are often wondering if she’s half blind. People actually know very little about this breed. It is actually quite funny to hear their reactions. Anyway, back on subject. Huskies have strong and firm legs – both front and back, with rounded hairy paws resistant to freeze. Huskies trotting movement is easy and elegant and they are able to run awfully fast – when they start to chase, hardly anything can escape! Its tail is long, hairy and brushy. The fur on its tail is longer in comparison to the rest of his body and is equally spread from all sides – it is very similar to a wolf or fox tail. When happy and mindful, Siberian holds it high above its back in the form of a sickle. With such physical characteristics, it is no wonder Siberian Husky is such a beautiful and elegant dog of incredible strength and agility.

Siberian Husky proportions are as follows: This is where I belong!

One of the most significant Siberian Husky characteristics is his almost identical look with the wolf, which is why he’s, besides Alaskan Malamute, often used in movies as a replacement for this legendary wild animal. There is a common opinion that Sibe is more wolf than a dog. I know that many of you are wondering – is the Siberian Husky a wolf hybrid? The answer is NO! Huskies and wolves are indeed very similar physically, they look like much closer relatives than Huskies and dogs, but in reality Siberians are, well, just dogs. You see Siberian Huskies have 99 percent of genes identical to all other dogs. The remaining 1% of genes distinct them from all other dog breeds. Also, wolves are strict carnivores and cannot digest amylum, while Huskies, like all other dogs, can. That’s why they eat a wide variety of food, which makes them omnivores. But, they really have some wild habits similar to wolves, such as howling or inborn prey drive. Yeah, these dogs can be very dangerous for cats and other small pets. I suggest you warn your neighbors to keep their pets at safe distance, because with these dogs you never know what they’re capable of – they are very unpredictable.

Among many other characteristics of Siberian Husky, perhaps the most iconic is his inborn ability, or better to say instinct, to pull the sled. All dogs in general have instincts of their own – e.g. Labrador Retriever has an instinct to run after the stuff you throw, but Husky‘s sled pulling instinct is a special one and, on top of that, very useful. It actually made him famous all around the world. His strength, agility and swiftness, combined with his great resilience, are the main reasons Sibe is such a great dog for this task. Chukchi tribe in Siberia developed this breed to meet their specific needs. Since Chukchis have been living in the harsh polar environment through centuries, they needed a strong and endurable dog to pull their sleds over vast distances. It was a rigorous process, but in the end it paid off marvelously. Thanks to this ability, Huskies have been participants in numerous brave undertakings. On top of that, they are inevitable competitors in every dog sledding race. However, this is the reason it is so hard to control this dog while on a leash. So, tighten the reins, just in case ;) With this I’ll wrap up my article about Siberian Husky characteristics. Later on, I’ll present you with detailed articles about this breed’s temperament, training, care, etc. 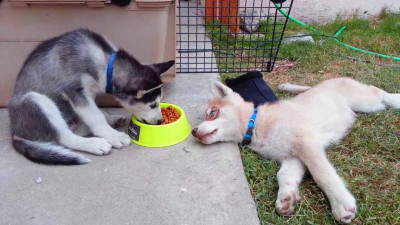 Choosing the right food for Siberian Husky might seem like an easy job - they can eat almost everything, but...